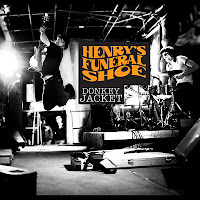 Cool! There's a song about donkey jackets. I haven't heard the song yet but I will later.