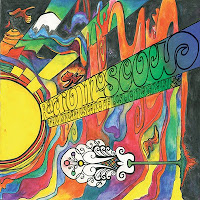 Radio Moscow, for those not already acquainted, is a heavy, heavy psychedelic blues rock band from Iowa (now California) whose first, self-titled album was produced by kindred spirit Dan Auerbach (Black Keys) in 2007. They released a second album, Brain Cycles, in 2009 and they're back with more - The Great Escape of Leslie Magnafuzz will be out October 11 on Alive Naturalsound Records. 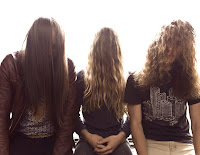 This is a classic heavy rock power trio: Parker Griggs on guitar and vocals, Zach Anderson on bass and Cory Berry on drums... although Griggs plays them on the record, and very well. Griggs apparently plays everything but bass at some point, including the keyboards. I could throw enticing influences (Blue Cheer, Jimi Hendrix Experience, Deep Purple, Black Sabbath) at you all day, and continue to play the Black Keys card, if that would induce you to give a listen.

The record starts out in medias res, truly in mid-jam with the drums pounding and guitars wailing on "Little Eyes" (available for download here). It's a spectacular 4:46 of brain-melting heavy guitar, drums and bass with strong rock vocals and some tasty keyboard licks thrown in for good measure. Second song, "No Time", has some classic boogie a la The Allman Brothers with more heavy guitar solos throughout - one thing I like about this band is that while they definitely take advantage of the length of their songs to play plenty of solos, there's not any noodling. It does not feel like time's being wasted - they fit a lot of sound in a relatively compact space. Half the songs clock in under 4:00 but are still filled with delicious, heavy and spacy guitar solos. It rocks, hard, but is plenty psychedelic.

Here's a performance video from Binic Festival in France earlier this year:

Here's "The Escape" from their previous album:

These guys are completely and unapologetically committed to a heavy rock sound. If you're not familiar with their previous records, and you like this sound at all, you are in for a treat.