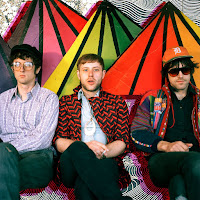 Gardens is a punk/garage rock band from Detroit. They've recently released their self-titled debut album on Alive/Naturalsound and are embarking on a tour beginning October 18.

What they've got is talent and some intriguing song ideas: the opener, "Teachers", is vintage Detroit garage punk... the guitars are pretty primal, vocals snotty and the song really moves along. Here's the video:

Second song, "Ideas to Use", while still nostalgically primal and lo-fi, really slows down the tempo until it picks up about 4:00 in. The longer pieces on this record sound like Gardens has combined several song ideas into one song... a pretty sure way to hook a GbV fan like yours truly.

Some of the songs just move along on a true punk backbeat/bassline combination... check out "Alive in 5D" with its Stooges guitar lines (and some catchy, simple guitar solos), or this one, "Staring at a Line":

There are some goofily arty moments, like the spoken word/a capella intro to "Living American"... with echoes of some of George Clinton's proto-raps on old Parliament records. Then, after about a minute and a half of this, it turns into a garage rock raver. Here's a video of the song in live performance:

And just for a little more variety, the record closes out on a 4:14 keyboard-based bluesy number, "Morning Refresher". All in all, a very engaging debut. Not to make too much of the "retro" aspects, because there's plenty of variety in the tempos and sound levels, but the best moments on this record will definitely put you in mind of your garage/punk favorites.