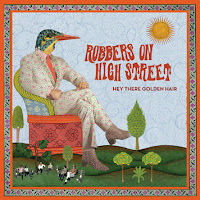 Robbers on High Street are a Brooklyn-based, rather large pop band who play a bracing mixture of indie rock, British Invasion and soul sounds that, in places, reminds me favorably of The Style Council.

Apparently they've been through a few lineup changes since forming in 2002... On Hey There Golden Hair, it's a big group with a big sound - guitars, piano, harmony vocals, and they've thrown in the Dap-Tone horns for some extra flavor. It all goes together very well.

Vocalist Ben Trokan really takes this band different places: Beatlesque baroque pop on lead track "Hollow Hill", a soft croon on "Electric Eye" (a little bit reminiscent of Wilco circa Summerteeth),  ragged and plaintive in "Monkey", and, by God, positively Kinksian in "All Wires Are Crossed". I'm impressed. Can you tell?

The band keeps up just fine, travelling through impeccable pop territory on "Hollow Hill" and "Face in the Fog" (which prominently features the Dap-Tone horns to great effect), and really driving hard on the urgent "Monkey"... all the way through to the impeccable power pop tour de force closing track, "Supernatural Shivers".

Here's a video of them performing "Face in the Fog":

Here are a few tracks, courtesy of ReverbNation:

If you like what you hear, I'd recommend going over and checking out the opportunity they've offered to download a free track, pledge and receive a free EP along with the album.

Out September 13 via The Connextion and Pledge Music, and highly recommended. I think this is a beautiful pop/rock record.