REVIEW: The Janks - The Hands of Time 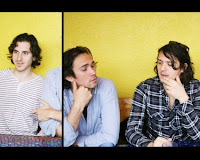 The Janks are LA-based brothers Dylan and Zack Zmed with Garth Herberg, and they play an intriguing blend of old and new... for fans of some of Jack White's heavy stuff with the Raconteurs, there's common ground... check out the heavy start in opening track "Demon Dance", for example. But for all-out fans of 70's rock, there are points of reference, too. And songs like "Dead Man", with its mixture of Thom Yorke-style vocals, acoustic guitar and keyboards, are just good old-fashioned rock music. Like I said, intriguing. Here's the video for "Dead Man":

The title track, "The Hands of Time", starts out like a Fairport Convention track and is definitely the ballad of the bunch, really putting the vocals up front to emotional effect. "Rat Racers" combines The James Gang with Queens of the Stone Age, maybe... it's a nearly six minute track with plenty of good electric guitar and a swagger you used to only hear on album rock stations back in, you guessed it, the 70's.

The next few songs: "Billy The Kid", "Can't Give Up", "Echo Whispers" and "Don't Hide Your Eyes", slow it down, indulging in a lot of emotional, sometimes whispered vocals over hushed acoustic guitar, electric piano and pedal steel. It's real pretty stuff... until "Separation From Your Body" gets the guitars cranked back up again, and brings it to a crescendo with more soaring guitar solos and layered keyboards over drumrolls fading in and out.

"Drama King's Ball" features a reggae beat and a sneered vocal that will bring to mind the last couple of White Stripes records. A circus interlude, the :42 "Adolescence", leads to the heart-rending "When I Was a Kid", "Child Prodigy" and "Get Out of Town".

According to the artist, it's a concept album. "The album is like musical theatre," says The Janks' Dylan Zmed [Vocals, Guitar, Keys, Percussion] "The first half develops the plot of a young boy who comes from a broken home, while the second reflects the visceral intensity of growing up from separated roots. At the end, we see there's possibility for change."

This record will be out September 27 on Sprouted Records.