In Other News: We will continue to overdose on Pollard... happily

From the press release from GbV world HQ:

DAYTON, OH: Having finished their year-long victory lap, playing songs from the insanely fertile 1992-1996 period, there was only one thing left for the reunited Guided By Voices to do. Make a new record.

Let's Go Eat The Factory picks up where Under The Bushes, Under The Stars left off, with the classic lineup (Robert Pollard, Tobin Sprout, Greg Demos, Mitch Mitchell, and Kevin Fennell, with help from the reclusive Jimmy Pollard) writing and recording 21 songs in lo- to mid-fi splendor in bandmembers' basements and garages. The songs range from face-peeling heavy rock to delicate piano ballads and everything in between. Standouts include the demonically tuneful "Chocolate Boy," the relentless chug of "We Won't Apologize For The Human Race," and instant classic "The Unsinkable Fats Domino."

Fans of GBV's iconic release Bee Thousand will recognize the same gloriously messy aesthetic in Let's Go Eat The Factory, which benefits, too, from the development of Robert Pollard's songwriting in the intervening 15 years and the renewed camaraderie effected by the reunited band's extended tour. The new album will be released on January 1, 2012 on GBV Inc.

Circus Devils hits the high seas with CAPSIZED! (The exclamation point is part of the title!). Once again the Ohio trio featuring Robert Pollard defies and transcends musical genres with a strangely coherent blend of soft rock, aggressive stompers, creepy soundscapes and a radio-friendly pop single (Cyclopean Runways). CAPSIZED! is cinema for the ears, taking the listener on a dark adventure with strange cargo, sirens, shipboard ghosts and bad soup.

Twenty-six tracks, as recorded by Bob on his guitar then shipped off to Chris to begin work on Boston Spaceships' masterpiece. This release is CD only, a Rockathon Records exclusive and is limited to 500 copies. Hand numbered by Bob himself. Only Available Online. 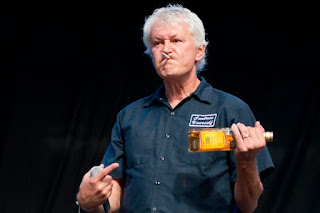 In case you can't make it out, Bob's shirt says "Contain Yourself" which is a lyric from the insanely catchy (how to distinguish it from the thousands of other insanely catchy Pollard songs? Your problem, not mine) "US Mustard Co." Good advice, but pretty hard to follow on the heels of news like this.

‎"The [GBV record] after this has already been written, or at least Bob has written and recorded demos and sent them to the other bandmembers. It’s called, for now (keeping in mind that Bob Pollard titles are apt to change) Class Clown Spots A UFO. By contrast with Let’s Go Eat The Factory, Bob plans to record at in studios, likely including not just Toby’s semi-pro set-up in Michigan but Todd Tobias’ very-pro set-up in upstate Ohio, and possibly one or two spots in and around Dayton. He aims for a more polished sound than on LGETF, but I don’t think anyone should worry that Guided By Voices are going to put out a Roy Thomas Baker abum. The band is hoping for a May release."

When I wrote a short review of the GbV classic lineup show in Nashville, I threw out the hope that they might regroup and do another tour. An album seemed too much to hope for. So, of course, they're doing two!