The Soul Corner - "Dancing in the Streets", Martha Reeves and the Vandellas 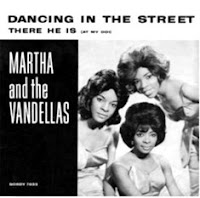 In 1964-65, the country was being ripped apart by racial tensions and the South's bitter and violent resistance to the civil rights legislation coming from the federal level. And the young people of America were awakening to the horror of the Vietnam War.

Motown released a song that turned all that tension on its head, appealed to the best instincts of the young people in the US, and leveraged the unifying power of music.

"Dancing in the Streets" was just as important a political statement as Bob Dylan's protest songs, Buffalo Springfield's "For What It's Worth" or later more overtly political Motown songs like "What's Going On" or "War". And the song certainly set a stake in the ground for what Motown was all about. The new world order of racial integration was "a chance for folks to meet" - how wonderfully calm and understated.

"Dancing in the Streets" was co-written by a guy who knew a thing or two about soul songs and politics - Marvin Gaye.

The song essentially said -- You squares and racists have no idea how we kids feel. We aren't freaked about race like our parents and grandparents are. White kids and black kids can come together peacefully and have a great time. And our beats are so much better than any stuff you ever listened to. We're one nation under a groove where "there will be swinging, swaying and records playing."

In short, it was a clarion call for freedom.

From a musical perspective, the James Jamerson bass lines here were the total bomb, and those bass lines and the entire composition had a huge influence on the Beatles, Rolling Stones, Dusty Springfield and pretty much any 60's musical artist that mattered. Even the Grateful Dead later covered this track.

Martha and the Vandellas' version of "Dancing in the Street" is one of 50 sound recordings preserved by the Library of Congress to the National Recording Registry. Lead vocalist Martha Reeves recently served as an elected member of the Detroit City Council.

I put this up today because Detroit is the city I was born in, and my beloved Detroit Tigers start the playoffs tonight against some team called the New York Yankees.