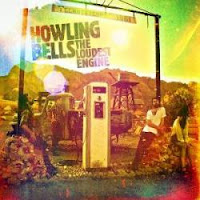 In announcing this release, the band made much of the impact the location (Las Vegas, the Great American Landscape) had on the music on it, and in listening, I'd say they ain't lying. They're laying down a very heavy blues-based foundation -- a big, American rock sound with a psychedelic lean a la The Doors. But lead vocalist Juanita Stein can really sing, and her clear, strong voice is not the least bit overwhelmed by all this rock.

The Loudest Engine starts out with "Charlatan", which is something like Maria McKee fronting Queens of the Stone Age, and rolls into "Into the Sky" (we posted the video previously here), which has a beautiful, transcendent vocal fronting a very tough-sounding rock band. "Wilderness" is more of the same, but things slow down a little bit on "Secrets", giving the band a chance to demonstrate some real skill at varying the tempo - it doesn't all have to be heavy. "Don't Run" is a bona fide ballad, a country-sounding acoustic-based song that really suits Stein's phrasing. "Gold Suns, White Guns" exhibits a wall of sound quality with some psychedelic guitar over the second half of the song. Again, the common thread throughout the album is Stein's vocals, and Howling Bells are smart to feature it this prominently.

The record is out tomorrow (Monday, Sept 12). Right now you can stream the album at their Facebook site, or visit Howling Bells Website to find out about buying it.
Posted by John Hyland at 9/11/2011