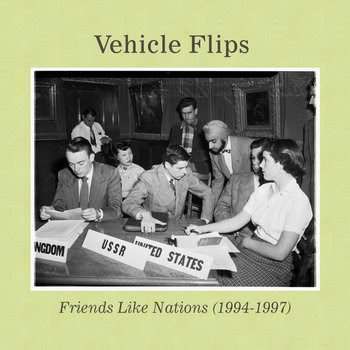 As I understand it, first there was the short-lived Wimp Factor 14.  That band spawned Vehicle Flips, formed by Wimp Factor 14 frontman Frank Boscoe, and Puget Sound's beloved twee punks Tullycraft.  Boscoe later formed Gazetteers, but the latter group is a subject for another day.  Our current focus is Vehicle Flips, and more specifically Friends Like Nations (1994 - 1997), the new 25-track collection of singles, compilation tracks and previously unreleased tunes from Jigsaw Records.  This album would be worthwhile if it just served the needs of indie music historians or hard-core fans, but the delightful truth is that it is so much more.  The songs range from indie guitar gems with hints of Galaxie 500, Luna, and the Sugargliders.  But Vehicle Flips could make some noise as well, and Boscoe's vocals add the right touch of bratty punk attitude or garage rock snarl when the occasion demands.  For an example of the punk attitude, check out "Dodge Veg-O-Matic" below.  "O Tedium" has a swing to it that calls to mind the Doobie Brothers in full '70s summer stadium flight and "Duophonic Sterophonic" is a taught, spiky post-punk tune.

The singles and compilation tracks comprising most of this album were released over several years and on various labels, so this is the sole comprehensive collections of such tracks.  I was impressed with the excellent musicianship and Boscoe's interesting lyrical observations.  I also noted that in terms of inflection and tone, his voice reminds me of another wry commentator on life, John Darnielle of the Mountain Goats.  I have a lot of new music at my disposal, and this record is one to which I find myself turning with great frequency; it is a keeper.

And as you'll note at the Bandcamp link, the CD is a ten-spot, and the digital version is $8.

It is my blog, so we'll start with one of the best: "Impressed Beyond Belief" --


And then there is "Household Expatriate" --