New Video from Wolf People: "When The Fire is Dead in the Grate" 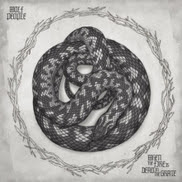 One of my favorite records of 2013 was the Wolf People's stirring, psychedelic folk/hard rock album Fain. It's pulling together English folk, blues-influenced guitar rock and hard boogie. Its expansiveness and musicianship first inspired awe, and on repeated listens it continued to deliver pure pleasure.

They've released a new video for the lengthy track "When The Fire is Dead In The Grate". According to vocalist Jack Sharp, “The video is meant as a B-Movie take on the Celtic mythology hinted in the lyrics. It sets out to capture one side of the song’s imagery as we see it. Shot on a beautiful morning in September on an incredible stretch of the Ouse just outside Bedford. It ended up as a great excuse to mess about on the river for a day and a night, ducking low-flying kingfishers (that we sadly failed to film) and trying to avoid getting the equipment wet.“

They released an EP following up the album in December - the lead track is "When the Fire is Dead" but it also features two new tracks, one an extension of one of Fain's standout tracks, "All Returns II":