Review: The War on Drugs "Lost in the Dream" 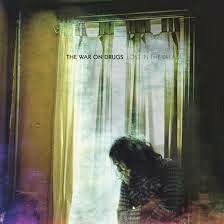 The War on Drugs' Lost in the Dream is an hour long journey to musical bliss, every song taking surprise turns, elastically swirling, layering more and more sounds - guitars and rhythm and keyboards and a baritone saxophone - packed with a subtle-on-the-surface but underlying emotional wallop that very few rock records achieve.

Adam Granduciel spent a year making Lost in the Dream, reportedly fussing meticulously over every note from every instrument. But rather than that resulting in a cold mess as so often happens, Lost in the Dream is a perfect realization, both sonically and emotionally, of Granduciel's strong vision for the record.

The first time I heard Lost in the Dream, I was driving in the car after a very bad work day, and it immediately saved me, took me somewhere else, reminding me a bit of a couple of my favorite ever road trip bands - The Feelies and Luna - and allowing me to be transported, hypnotized, transformed. But what's particularly interesting about that is the songs create a palpable sense of being lost, hurt, smothered. But at the same time there's a cathartic letting go - the soaring choruses, the highly effective vocals, the searing guitar lines, the attention grabbing ring of the keyboards and saxophone.

I could highlight any one of the 10 songs here, not a false note anywhere much less a clunker. But the one just killing me today is "An Ocean Between the Waves", the title capturing how the whole of this record is so much more than the sum of its parts.

I'm in my finest hourCan I be more than just a fool?It always gets so hard to see night before the moon

Lost, trying to hang on, tension rising and then - bam! - the song unfurls, the crashing of the waves, giving way to a massive release.  Listen here:


"Red Eyes" is the featured song from the CD with a proper video, perhaps the best track for radio because at only 4:59 it's shorter than nearly everything else here, and even by War On Drugs standards has a massive and wonderful chorus:


I have to give you one more, the first song, "Under the Pressure", a moody, stunning opening statement of a song - "Standing in the water, just trying not to crack, under pressure" - a slow burn with a sonic and emotional haze of of psychedelic guitars and synths, where the song swirls and builds, then ultimately recedes. Listen at the 5:20 mark when you can hear Granduciel whoop, as he does on other songs here, when he finally releases the tension:


Lost in the Dream is a starkly original work, hard to categorize, though it draws from Dylan, Neil Young and Springsteen, psychedelia, 80's post-punk pop, Americana, and bears somewhat of a musical kinship with fellow Philadelphian and former War on Drugs member Kurt Vile. But Granduciel creates a bold sound here, unmistakably him with every note, assisted by very capable players.

While it doesn't sound like either of these records, Lost in the Dream reminds me of Van Morrison's Astral Weeks and R.E.M.'s Murmur with how it creates a timeless sound, a feel, an emotional and unique journey - and listen to any part of it and you know you aren't listening to any other record.  And placing Lost in the Dream in that company is about the highest praise I can give.