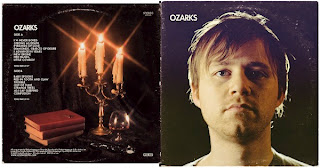 If you enjoy Flaming Lips and Jason Lytle (Grandaddy), I probably don't need to tell you any more about Robbie Augspurger and Eric Lee's Ozarks than to say you will definitely like it. If you don't, you may want to give this a chance anyway... there are more Hollies, Beach Boys, Beatles and other 60's/70's-inspired pop/rock moments than you can count. Actually, Augspurger wants you to count them...

I’ve been obsessed with recording music since I was about 13 years old, when I read The Beatles Recording Sessions by Mark Lewisohn. I loved that book and must have read it over 20 times until finally, its binding disintegrated. The dream of my youth was to get a mixing console so I could de-construct the Beatles’ mixes, until I discovered I’d need the master tapes to do that. So instead, I analyzed their stereo mixes one channel at a time on my dad’s old quadraphonic hi-fi system, trying to pick out sounds I’d never heard before.

That’s another thing we wanted to try with this record—have people pick out the references we make in the music. We thought it would be a funny thing to do.

Funny, maybe. Definitely enjoyable. This is a fun record that, like the work of Lytle, Coyne (and dare I say, Brian Wilson?) really rewards repeated listening. In addition to the baroque keyboard and vocal elements, check out the guitar lines on songs like "Out Of Tune" - a country-sounding break early on, and some sweet slide guitar later, with reverb laid on top. Every song reveals moments like this once you give them the chance.

As a non-album bonus, here's a video for Ozarks' cover of the Beach Boys' "Til I Die":