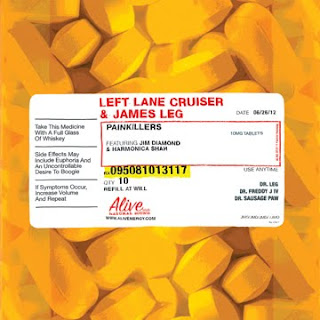 James Leg, who sings dirty blues in a voice that makes Tom Waits sound operatic, and Left Lane Cruiser, who play dirty blues as a duo, have combined forces to release Painkillers, an album of, you guessed it, dirty blues. It seems every generation rediscovers the glory of the blues, and this one is no different. Whereas the Stones worked with Howling Wolf and Clapton covered Robert Johnson and Sonny Terry and Brownie McGhee, these cats are mixing their "original" blues with some later generation stuff.

It was recorded in Detroit, and with the involvement of Jim Diamond and Alive/Naturalsound Records, the pedigree is impeccable... but check out the song lineup.

Covers on this record include "Little Red Rooster", "Shake It" and "Come To Poppa":

But it also includes some pretty inspired choices: "Sway", "When The Levee Breaks", and "If 6 Was 9". These are not as you have heard them before... to say the least, and in their stripped-down, dirty versions is a combination of reverence toward the progenitors of the blues and a spirit of pure enjoyment that is rare to find.

This is a fun record for anybody with a taste for the blues.