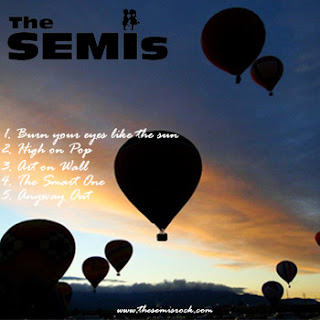 The Semis are a rock band from Tampa/St. Pete consisting of Billy Summer (who writes, sings, plays guitar and bass) and Kyle Lovell (drums). I don't qualify "rock" in any way, because to do so would be to minimize what they're doing. As I've observed in a previous review, they tend to veer from Stones raunch to clean, pretty, summery power pop (sometimes in the same song), and the common denominator is frontman Billy Summer's absolutely devastating way with a hook.

Whether it's any of the truly tasty guitar licks on songs like "Burn Your Eyes Like The Sun" and "The Smart One", or the rapturous vocals on the title track (currently my favorite song of 2012, by the way), The Semis define catchy... but without ever losing the edge that leads you to believe these guys could keep an Ybor City dive, or a bar full of SEC frat boys, rocking, dancing and hair-throwing along through a night of rock. That's a rare quality. To me, it puts Summer in a pretty small group with artists like Will Johnson, Jim James and Robert Pollard -- able to make a ridiculously catchy, poppy song, almost on demand... but also able to deliver razor-sharp rock with a pounding rhythm section and old-school guitar solos to keep things from getting too sweet.

As far as musical labels, you could call some of this psychedelic and you're never far from a power-pop breakout, but there are shoegaze elements in some of the guitar work - the way it's layered, mostly. And there are times this stuff, especially some of the solos that take flight, really reminds me of Crazy Horse.

Much like the Henry Clay People (read Scott's recent review), and personal favorite Centro-matic, I believe the Semis deserve a lot more exposure. Bands like this make wading through all the "other stuff" worthwhile. I've had the five songs on High On Pop on almost constant repeat for the last two weeks, and haven't tired of them yet.

Here's a link to download the EP. It's "name your price". Although I understand the reasoning behind offering to let you have it potentially free -- as a foretaste of a forthcoming album -- you really should pay for music this good. But hey, you're on the honor system. Me, I just want them to keep making music.

And today's your lucky day... Billy has also made the previous album Decapitator Blues available on Bandcamp. You can read my review if you would like, or you can just go ahead and download and listen for yourself.

Billy is brilliant, has been for a very long time! The semis are phenomenal live or otherwise!
Spot on review! They should get more credit than they do...