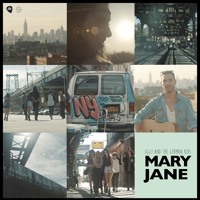 "Mary Jane" is an infectious summer jam that will find its way on to a number of seasonal and party playlists.  The source is Iggy & The German Kids, which is comprised of New Yorker Iggy (Ignacio Uriarte or Marshall, depending on whether one believes the website or Facebook) and production duo DTC Music Productions.  DTC are Hubertus Dahlem and Freddy Todenhofer, who are from Germany and apparently met Iggy at Munich's Oktoberfest.  Thus, the collaboration is Iggy & The German Kids.  The synergy between the producers and Iggy, who trained as an opera singer as well as mastering several instruments, seems to have found a pop music sweet spot.  A debut album is being prepared, and based on the evidence of the several tracks I've heard, I expect it to be good.

For the single, "Mary Jane" is paired with the more straightforward electro-pop song "Follow the Sun".  Both are available singly or together on Amazon and iTunes.