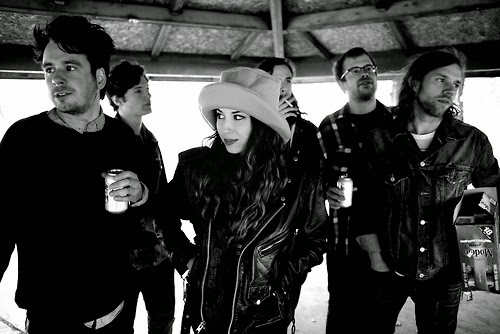 We've been all in for Jessica Hernandez and the Deltas for some time, featuring them here at WYMA a few times, from as early as June 2013. So it's an understatement to say we've been looking forward to their first full length LP, Secret Evil, to be released on August 19.

Let's cut to the chase - Jessica Hernandez is a star waiting to happen. She's a powerhouse performer, blessed with a memorable and strong voice, and charisma to burn. And the Detroit native is backed by a crack outfit who do the rock and soul traditions of that music mecca proud, yet take it in their own new direction, influenced by not only Detroit's rich musical heritage but by rockabilly, ska, and Hernandez' Mexican-Cuban-American roots, having grown up in an inner SW Detroit neighborhood known as "Mexicantown". Her family owns a popular restaurant and a bakery there. This young Detroiter embodies the new Detroit resurgence - artistic, edgy, street smart, socially conscious.

Secret Evil is a big step up for this young band compared to their early recordings. It's well produced by Argentinian Milo Froideval (won a Latin Grammy for Best Alternative Album for Ely Guerra’s Hombre Invisible), and aided by the radio-friendly mixing of veteran hit maker Richard Gottehrer, owner of Instant Records, the label releasing Secret Evil. Gottehrer produced, among many noteworthy things, the Blondie hits, and there's a similar big city toughness yet accessibility here. The use of horns throughout this CD, which the band employs live as well, is outstanding, makes the songs jump, with a nod to the great Stevie Wonder 1970's hits.

Let's start with "Caught Up", a garage-surf rocker that perviously appeared on the band's Demons EP, with a very winning video here:


"Sorry I Stole Your Man" has a similar avant-garage feel, with a hint of Latin jazz and some fantastic background vocals honoring the band's Motown lineage -- love the girl group sound in the fade out -- though sorry to say there's no audio or video available for that one yet that I can link.  That song has become a highlight of the band's live performances. Aug 5 update: USA Today posted an exclusive audio of the song right here: usatoday.com/jessica-hernandez.

Here's a link to the audio of opening track "No Place left To Hide", maybe the most pure rock song on the record:


"Tired Oak", one of the songs on Secret Evil that seems ready for commercial radio:


Hernandez' range as both a singer and artist is best reflected in a ballad here, "Cry Cry Cry" (an original song, not the Johnny Cash classic), just a beautiful vocal where she puts her big rockabilly belt-it-out gear on pause, and instead shows off her softer and higher register. Recorded version not yet available for public consumption, but here's an audio of a fine live version:
https://soundcloud.com/michigan-radio/jessica-hernandez-the-deltas

The hit here in my view, and hey aren't we all frustrated A&R geeks, is "Dead Brains", a hybrid of Detroit soul, ska, and modern dance rock, with a killer chorus. If the band catches just a little break it wouldn't surprise me to see 80,000 kids at the next Bonaroo or Coachella festival jumping up and down and singing "Your brain's gone dead, you feel no power, where's your head?" Here's an earlier version of "Dead Brains" live, acoustic, super stripped down. Pop quiz: Is there anything more Detroit than piling into a Lincoln Continental with your friends and driving around singing? (A: No).

This album reflects Jessica Hernandez and The Deltas absolutely irresistible sound and personality. As good as Secret Evil is, and it will for sure be high on my Best of 2014 list, I still sense that Jessica Hernandez' best work is ahead of her. The sky is the limit for this band. Get on this bandwagon now while there's still room.

You can pre-order Secret Evil now for just $7.99 at iTunes here.