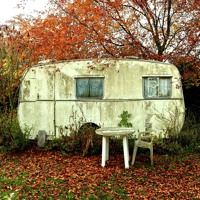 As Astronauts, former Dark Captain Dan Carney takes you on an unlikely space journey.  Rather than launch the listeners beyond the atmosphere, the new LP dares you to venture inward.  To face the dark corners, the regrets, the insecurities, as well as the hopes, strengths and dreams.  So for this one, turn down the lights, settle into a chair, put on your earphones and become immersed in the brooding, atmospheric electro-folk/pop of Hollow Ponds.  Just in time, it is raining here.

Perhaps perversely, given my introduction, the album commences with a soaring ray of light in the form of "Skydive".  Already released as a single, I think it is one of the highlight songs of the year so far.  Such moments of brightness aren't typical here, to be fair, but the emotional weight of the songs is adeptly balanced by the thoughtful acoustic instrumentation, hushed vocals, ambient electronics, intriguing rhythms and, quite notably, the judicious use of space.


The brooding begins in earnest with the contemplative "Everything's A System, Everything's A Sign".  The song is emerging as one of my favorites on the album for several reasons, but one is the delightful rhythm track.

Driven by ominous instrumentation, electro-pop track "Vampires" is one of the more up-tempo songs on Hollow Ponds.  Then the pace drops to dream state for the standout track "Flame Exchange".  Hushed vocals float on gently picked acoustic guitar and a barely-there synths to create a sadly beautiful song.


"Spanish Archer" gets the blood going again, bouncing along as perhaps the most mainstream pop song on the album.  But Carney's more melancholy purposes pull us back on the following title track.  In fact, the first third of "Hollow Ponds" is so sparsely adorned that the listener might be tempted to adjust the volume.  Patience is rewarded, however, as the beat rises and vocals drop in, resulting in a very rewarding seven minute exploration of inner emotional landscapes.  "In My Direction" continues the hushed vocals over yet another delightful rhythmic foundation.


"Try To Put It Out Of Your Mind" is the electro-pop version of a relaxing babbling brook, while "Openside" crosses the line into indie rock territory, and is the most expansive track on the record after the opening "Skydive".  The album closes with the acoustic plucking and nearly whispered musings of "Slow Days".

Hollow Ponds is an interesting and rewarding journey.  And at the end, we may all be able to call ourselves Astronauts.  The album is out now via Lo Recordings.