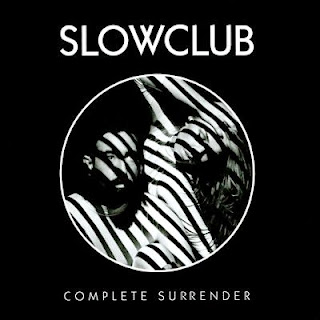 Slow Club is a British soul duo consisting of Charles Watson and Rebecca Taylor. Both are excellent vocalists and each play a variety of instruments. Since forming in Sheffield in 2006, they have released two EPs and two albums, the latest and current one being the delightfully soulful and wide-ranging Complete Surrender. From the opener, "Tears of Joy", which sounds a bit like a cross between the modern dance rock of Arcade Fire and classic 70's folk rock, to "The Pieces", a swinging, soulful combination of rock instrumentation, horns and lush vocal harmonies, the album is a joy to listen to all the way through.

Complete Surrender is, in essence, an exploration of five or six decades of radio-friendly sounds with a refreshing willingness to embrace modern (or post-modern?) production techniques that somehow makes the whole thing even better - anchored in classic soul and pop, but a few degrees off from the often-heard "retro soul" sound. Those horns, those vocal harmonies, the insistent drumbeats, it's all of a piece and makes for one of the best records you'll hear in 2014.

The vocals and guitar lines on the ballad “Not Mine To Love” are extremely well-done, classic guitar pop - nothing new, but a classic sound that is presented just about perfectly. As it should be, the song is a showcase for Rebecca Taylor's vocals. Her range and just the variety in presentation are impressive. As slow and evocative as this track is, she switches to a quicker, poppier sound on the title track and the contrast between the quickened drumbeat and the lush strings throughout the track, as well as her multi-tracked vocals in the chorus, are terrific touches.

There's a big, Motown-meets-British-soul feel to "Suffering You, Suffering Me".

Watson has a few impressive vocal turns as well, and his quiet ballad "Paraguay and Panama" provides a nice counterpoint to the lush, full pop stuff.

Giving a bit of background to what drives their sound, Watson says: “We really didn’t want it to sound ‘retro,’ but we wanted it to have that grace and sort of respect for itself. I think it’s in the playing really. A lot of those old records they’re not coated in reverb and that’s what people tend to go for. It tends to just be really amazing players that have practiced and locked in. We just tried to practice the best we could.” And that, to me, is the point of Complete Surrender and where Slow Club have succeeded. They have clearly practiced, and certainly locked in. Like so much of the big radio rock we loved in days gone by (Fleetwood Mac, Hall & Oates, to name a few), these two are able to combine reverence and creativity in a delightful way. Take note of this record and these two musicians. They're at a very high level. The album is out now (released July 15) on Wichita Recordings.