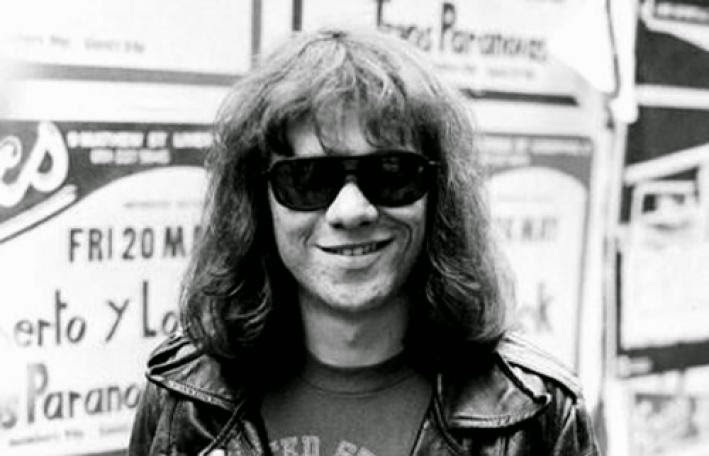 The last living original member of The Ramones, drummer Tommy Ramone, died of cancer yesterday.
Thomas Erdelyi was born in Budapest Hungay in 1952, his parents both Holocaust survivors. He was raised in Forest Hills, New York.  He started his music and studio career at a young age, serving as an engineer on Jimi Hendrix' Band of Gypsys record (1970).

Tommy Ramone was the glue to The Ramones, and a highly influential drummer. He was as responsible as anyone for The Ramones indelible sound, and their uncanny ability to sound primitive and incredibly precise at the same time. And he was the main writer of one of the Ramones most iconic songs "Blitzkrieg Bop", done here live in 1977, fantastic footage:


Joey Ramone was The Ramones original drummer when they first got together in 1974, and Tommy was their manager. But Tommy had to take over on drums when Joey couldn't keep pace with the increasingly fast pace of the songs they were writing, moving Joey out front to sing. Tommy left the band in 1978 (replaced by Marky Ramone), though stayed around to produce Road to Ruin and later Too Tough To Die (1984).  But The Ramones sound and legend was made on their brilliant first three records, all featuring Tommy on drums and as co-producer -- Ramones, Leave Home, and Rocket to Russia.

Tommy had a long career in music, playing many instruments and styles of music, including bluegrass. But he further left his mark on rock and roll by producing one of the very best albums of the '80s, Tim by The Replacements. While so much '80's music is nearly unlistenable for its production (I'm talking to you Bruce Springsteen, and you too The Police), Tim sounds as perfect today as it did upon its release in 1985:


So The Ramones are all gone, which makes me feel both sad and old. Hard to believe every Ramone is now gone while every other member of the Rolling Stones has survived since Brian Jones' death 45 years ago.

I can't imagine any new band coming along now that would so turn everything upside down like the Ramones did in 1976, such equal parts anarchy and exuberant fun.

So we'll remember the great Tommy Ramone with one more, "Rockaway Beach", one of the greatest all time rock and roll summer songs; how this was not a top 10 hit I will never understand. Pay close attention to the drums, so perfect: