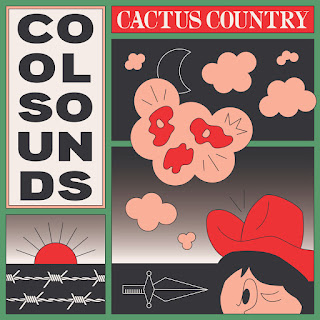 Cactus Country delivers the perfect vibe to kick off our weekend.  Spearheaded by the jaunty title track, it offers 11 tracks of soft rock/pop with a '70s sensibility (which really was a sweet spot for soft rock) with a western shading.  It is the creation of the Dainis Lacey helmed, seven-person Cool Sounds, a band whose name also serves as a foundational principle and mission statement.  The album radiates a force field of enviable cool, containing both upbeat songs that unspool like dawn on a sunny summer day and slower, moodier tracks.  We must admit that our initial focus was drawn to the former, but repeated listens to the more restrained songs reveal a compelling power and deft songwriting.  The result is a complete package that offers the listener one of the most important benefits of music -- it just makes you feel good.  At this point our favorite songs are "Cactus Country", Cassandra", "Twin Turbo", "Wrangler", "Loose Grips", and "Nowhere to Run".  Yeah, that is over half the album, and we like the others as well.  It is that kind of album.