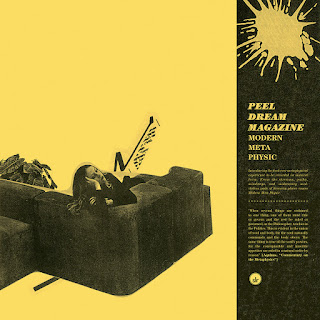 Modern Meta Physic is the work of New York City multi-instrumentalist Joe Stevens recording as Peel Dream Magazine.  In a world of formalistic pop genres, this album is a breath of fresh air.  Its thirteen tracks deliberately reach back to times when being an underground band, unrestrained by convention, the demands of labels, or the search for online streams meant something.  The music is lo-fi, fuzz drenched and experimental.  But the songs are good, and celebrate influences as varied as the Velvet Underground, French pop, Stereolab, The Clientele, and twee pop.  Thematically is is a bit tongue in cheek and a bit nostalgic, with ample doses of whimsy and humor.  It may seem audacious for Stevens to use the name of the great indie tastemaker John Peel in the title of his project, but the sensibility is directly on-target, and I suspect that if Peel were still around, he'd set up a few sessions to promote the band.  Of course, that cannot happen.  But you can stream some delights below, and then go to the Bandcamp link and have your own, personal session to keep.

Modern Meta Physic is out now via Slumberland Records.