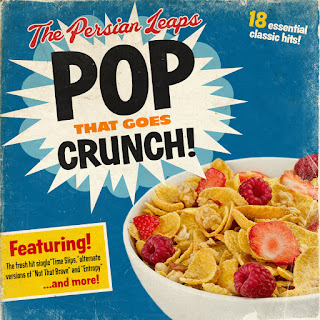 Drew Frosberg, frontman of St. Paul power pop masters The Persian Leaps and label czar of Land Ski Records, couldn't have chosen a better name for the band's compilation than Pop That Goes Crunch.  To be fair, he borrowed the name (with permission) from a radio show, but it really is the perfect title for a compilation of songs that reveals The Persian Leaps to be one of the best underrated power pop band in the United States.  The guitars do everything you would expect -- jangle, ring, buzz, chime, and of course, crunch -- and do it very well.  But what comes through even more clearly is just how good the songs are.  This is pop craftsmanship to celebrate.  In our view, many retrospective collections are enjoyable because they remind you of the good albums, and you accept a few songs that you suspect are makeweight.  However, with Pop That Goes Crunch something very different happens for us.  This album points out to us that a band who thrilled us with each EP was actually, when its production is viewed in its entirety, was an even better band than we thought.  Ten dollars for 18 songs -- it would be a bargain at twice the price.

In addition to Drew Frosberg, the band members for various songs on the album are B.J. Bonin, Adam Brunner, Brad Hendrickson, Michael McCloskey, and Neil McCloskey.