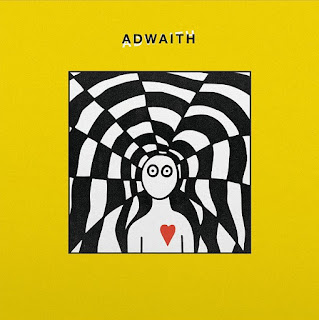 A lot of music hits our inbox, and inevitably, some doesn't get the listening time earned by the artist's hard work. We only have so many ears (averaging two per person, thank you) and limited hours.  But we do make an effort to look back from time to time and look for gems that we may have passed over originally.  So that brings us to a mid-month release that almost eluded us, and, quite frankly, it is a monster.  The record is Adwaith's full length debut, Melyn -- a fifteen track soundscape of beefy garage bangers, post punk dark pop, and well shaped art rock creations.  Except for the several interesting instrumental pieces, the lyrics are in Welsh, but we assure you that you won't mind at all.  The performances are confident and, when appropriate, aggressive.  The arrangements are ambitious and inventive the sonic details delightful, and the production quality is excellent.

We find much to love about this album, but perhaps most notable are the varied textures -- a riot of shades of grey with slashes of vibrant aural color, all conveyed with a tone conveying mystery and anticipation.  At the end of the year, Melyn will be in our top 25 albums.  It really is that good, and we urge you to hunt it down and possess it.

Adwaith are Hollie Singer, Gwenllian Anthony, and Heledd Owen.  Melyn is out now via Libertino Records.