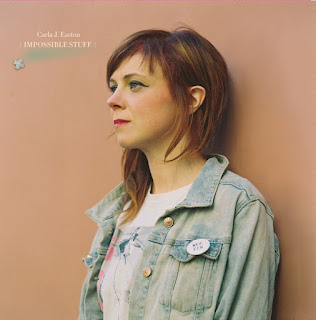 Listening to Impossible Stuff, the second solo album from Glasgow's Carla J. Easton (late of Teen Canteen and Futuristic Retro Champions), we have the distinct impression that nothing is impossible for this artist.  The album features ten well-crafted pop tunes generously stuffed with optimism, escape, romance, delicious melodies and fulsome arrangements.  An accomplished and versatile songwriter, Carla also has an impressive range as a vocalist -- equally adept at suggesting heartache and hope, prompting a dance and bringing things back down to earth with a whisper.  The production is impressive as well, with rich textures and a shimmery finish.  Impossible Stuff is a grand statement from a talented artist, will fit nicely into anyone's pop playlist.

Impossible Stuff is out now in vinyl, CD and digital formats via Glasgow's Olive Grove Records.  By the way, Carla's first solo album appeared under the name Ette.