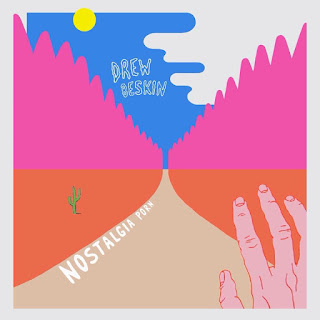 It seems to us here at WYMA that Drew Beskin moved from strength to strength in past projects such as The District Attorney, Party Dolls, and Purses.  However, it is in his current solo career that his talents come into even sharper focus.  The newly released Nostalgia Porn, Beskin's second album under his own name, bears his trademark hooks and melodies, and his prefect rendition of the sort of guitar pop that put Athens, Georgia on the rock map.  But it also reveals a singer songwriter vein that thrills as well as promising great things for the future.  The album's variety is impressive, with Athens-style rockers such as "Still She Speaks", "Nostalgia Porn" and "The Ice Storm" sharing space with retro guitar pop gems "Pharmacy Girl" and "Just As Long" (this one could have been the concluding 'slow dance' track for any teenage dance in the '60s).  And then there are songs like "Midnight Avenue Edge" and "Super Suh & Sunny", which in our view compare favorably with tunes by master singer songwriter Jackson Browne.  Oh, and we should mention that as good as all of those songs are, the showcase song in our almost humble opinion is "Suspicion from the Start", which has found its way onto a permanent slot on the office playlist, the phone playlist, the car playlist, and even our cranial playlist -- I found myself humming it on a 50 mile bike ride recently.

Drew Beskin is a perceptive and evocative lyricist, and writes music that colors our lives.  This is the sort of album that too few people find, but is treasured by all that do.  Be one of the fortunate ones.