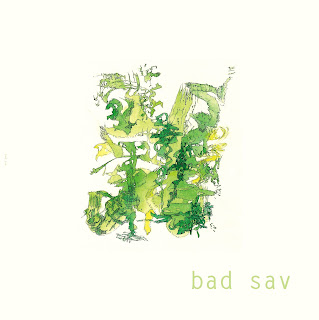 In our defense, we know a lot about a lot of things.  But we freely admit that we have no idea what "bad sav" means, or even what "sav" means.  However, if this band and their self titled album is Bad Sav, we don't want good sav.  We'll just stay with the Bad Sav, thank you very much.

All the players as known to us and our regular readers -- Death and The Maiden's Hope Robertson (vocals/guitar) and Lucinda King (vocals/bass) with Shifting Sands' guitarist and frontman Mike McLeod on drums.  Moreover, we have learned that this project proceeded Death and The Maiden and Shifting Sands, so maybe Bad Sav is the big bad daddy of the trio, or the mommy, we don't want to be patriarchal.  But you can ignore what you know about their other projects because Bad Sav is guitar rock, and guitar rock of great quality.  The ten tracks of bad sav bring noise, majestic noise, while still providing haunting vocals and dynamic arrangements.  This is music that is dense and melancholy, but also varied and richly detailed.  The pace can be stately, but the atmosphere is anything other than laid back.  In physical form, these songs would be too hot to touch.  Cue up the first track and get lost in the aural storm.  At the end of the final track, press play to start again.  Look at it as a new lifestyle.

bad sav is out now in digital, vinyl and CD formats via Fishrider Records in New Zealand and Australia and Occultation in UK and Europe.