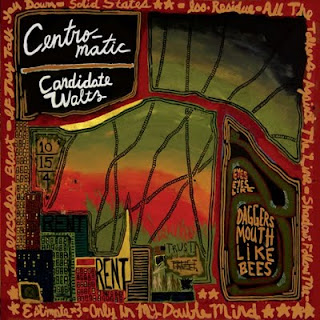 Candidate Waltz is the latest, long-awaited full-length record from Denton, Texas band Centro-matic. Will Johnson, Scott Danbom (keyboards, violin, harmony vocals), Matt Pence (drums), and Mark Hedman (bass and guitars) have made a terrific rock record that's catchy, crunchy and raucous. There's plenty of tension/release, plenty of great guitars, of course one of the best rock vocalists in creation and a few twists: for example, the lead track, "Against the Line" features some electronic effects, a new touch from Centro-matic, and a few of the other songs have some effects and found sounds, but for the most part it rocks.

"All the Talkers" is a straight-ahead rocker that seems to be about the experience of discovering a new favorite rock band, sort of cutting through all the chatter and being blown away by their sound. Certainly an experience most Centro-matic fans will relate to... it's got two fairly distinct parts, with a bit of a stop in the middle, but they're knitted together pretty well. "They played until we had been won... It was not like the night before." Bit of an understatement, that.

"Iso-Residue" and "Solid States" are two of the poppiest songs Centro-matic has done: "Iso-Residue" has a real upbeat drumbeat underlying a sing-songy intro and some snippets of keyboards that jump in and out, but fortunately a squall of guitar feedback ain't far away. About 1:10, to be precise, where the guitar comes in over the piano and takes off. "Solid States" proceeds similarly and transitions to a soaring guitar solo, but it keeps the upbeat backing throughout.

"Estimate X3" is a slow build Centro-matic ballad reminiscent of "Janitorial on Channel Fail" or "Covered Up in Mines"... and it leads into the wall of sound intro and reverb-drenched vocals of "Only in My Double Mind" (video and downloadable track available below):

"Shadow, Follow Me" has a real country feel with pretty piano lines and hushed vocals, and leads into "Mercedes Blast"... back to the full guitar onslaught almost from the beginning... Johnson sings over a restrained electric guitar line that moves in and out for a full minute until the drums, bass and keys kick in, but even then it's pretty controlled for about another 45 seconds, a few more guitar sounds are added and the song takes off, just really beautiful rock music. Finally, speaking of guitar lines, check out the riff on "If They Talk You Down", choppy, insistent, and underlying another soaring solo.

All in all, this record proves that Will Johnson's songwriting and creativity are still at a peak and that Centro-matic show no signs of slowing down. The first Centro-matic record I ever heard, All The Falsest Hearts Can Try, just knocked me out and at the time, I figured if this was all we ever heard from this band, the world would be better for it, but there was that hope... That was in 2001! Since then, there have been six Centro-matic albums, various EPs and South San Gabriel releases, and absolutely no diminution in quality.

This record will be released Tuesday. If you like Centro-matic, do not delay. If you don't know them, give a listen. They'll play until you have been won.

US summer tour starts this week: 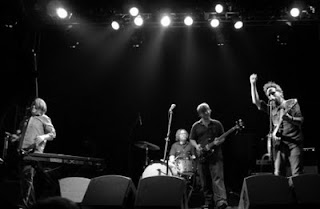