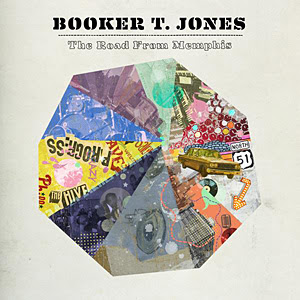 Booker Jones certainly needs no introduction. He's been producing iconic American music since his teenage years, when his parents had to make a choice to let him pursue his passion in late-night clubs in parts of Memphis most folks have never heard of. In the liner notes to this disc, Jones talks almost longingly about those years, when he was learning about the world beyond Millington, Tennessee and learning about how much fun it could be to make music for a living.

Then he talks about the road from Memphis, and of course we read those notes with knowledge of what he did from then until now... teamed up with Steve Cropper, Al Jackson and Donald "Duck" Dunn to form the MG's and made soul music that was never equaled. Whether your cup of tea is "Green Onions", "Dock of the Bay" or one of dozens of other soul classics on which his Hammond B-3 was indispensable, Booker has been providing soul to our popular soundtrack for over 40 years. Over the years, he's worked, either as a producer, sound engineer or by providing support on keyboards, with artists as diverse as Albert King, Willie Nelson, Kris Kristofferson, Rodney Crowell, Neil Young, Bill Withers... the list goes on and on.

The Road From Memphis is a treasure. It represents the interaction between Booker T. Jones and a new generation of musicians. This record features a supporting cast as diverse as any you will find: co-producer and percussionist ?uestlove, Captain Kirk on guitar and Owen Biddle on bass (The Roots), Detroit guitarist Dennis Coffey providing some of the great guitar licks he's been playing since his days in the Funk Brothers (Motown's legendary house band), My Morning Jacket's Jim James, Lou Reed, Sharon Jones and The National's Matt Berninger... and it succeeds, mainly because of the common ground the players all find here. Sound engineering is provided by the Dap-Kings' engineer, Gabe Roth.

As on his previous release, Potato Hole, Booker takes a contemporary earworm (last time, it was "Hey Ya", this time Gnarls Barkley's "Crazy") and provides a scorching organ line to fill the vocal's role on the original. While very enjoyable, this track is topped by what is, in my opinion, the best song on the record, "Progress". Jim James sounds like he was born to sing soul music, his voice and trademark reverb fitting in perfectly with the sounds Booker, ?uestlove and team are making here.

Here's the video for "Everything is Everything"... check out the interplay between Jones and ?uestlove, a great example of two generations of music both acknowledging and pushing one another:


Booker T. Jones - "Everything Is Everything"