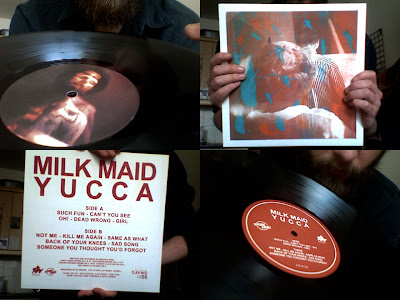 This Manchester, UK group seems an appropriate subject for a blog that takes its name from Guided By Voices, because the crunchy DIY indie rock of Milk Maid seems to me to be a good fit with Bob Pollard's musical sweet spot. The hooky melodies and guitar driven sound of their impressive debut release, Yucca, have drawn justifiable comparisons to Guided By Voices, Woods and Kurt Vile. But there is a decided The Jesus and Mary Chain noise pop strain that, in addition to the decidedly dark cast to the lyrics, personalizes the music to this band.

The sound of Milk Maid illustrates the surprises one can get when members of bands step out into a lead role in their own project. Songwriter and frontman Martin Cohen also is the bassist for the currently inactive Nine Black Alps, which has a very different sound. Cohen's musical voice seems to spring from a merger of the early Creation Records era and the melodic pop of the 60s, and unabashedly reveals the highest quality influences. The guitars are omnipresent but vary from fuzzy to reverb to scuzzy, offset by a pulsing rhythm section and semi distorted vocals.

I became a fan with my first listen to "Not Me", a noise pop gem which immediately shouldered its way into my list of favorite songs for the year.


Milk Maid - Not Me from FatCat Records on Vimeo.

In addition to Cohen, Milk Maid are Ian Hodson, Rick Entezari, and Luke Towart. The band is signed to FatCat Records, and is performing live in the UK in support of Yucca.


With eleven songs, Yucca has many high notes. A couple of the songs grabbed me less than others, in particular, "Oh", but I can truthfully say that all the songs are quality. In addition to "Not Me", my highlights include the punk/garage "Such Fun", "Girl" (which has a Guided By Voices vibe, to my ears), Dead Wrong, the jangly power pop ballad of "Can't You See", and the slow burner "Same As What". Overall, this is a type of rock music I love, and I hope this band sticks around for a long time.

A live performance of the album's opening track, "Such Fun"

How in the hell do I purchase this? Please help!

Went to Amazon, nothing...

Then I went to their page on FatCat and it said that the MP3s were "Out of Stock?" How in samhell can a record label run out of a non-physical entity?

Also check out this lo-fi, garage, surf rock band called Teens. They have the album for free on their website. I quite liked it on the car ride home today from work.

Ah from the FatCat website it appears it's not going to be released until July 19th!

Randal, in their digital store they give the July date; on another point on their site they use the June date. I'm guessing you will need to wait until July. Thanks for the recommendation on Teens.