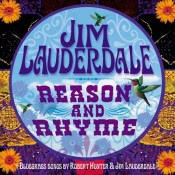 Reason and Rhyme is the third record by the songwriting team of Jim Lauderdale and Robert Hunter, the second in two years. The first two, 2004's Headed For the Hills and 2010's Patchwork River, were excellent country records... no surprise, for Lauderdale is one of the best true country vocalists in Nashville. This installment is straight-ahead bluegrass, and it is wonderful. Lauderdale's made some of the best modern bluegrass records, including several collaborations with Ralph Stanley, and has a great voice for it.

Here's a video of him performing the lead track on Music City Roots, a weekly live show from Nashville:

The band on this record features mostly the same lineup from 2007's The Bluegrass Diaries, including producer and resonator guitarist Randy Kohrs, bassist Jay Weaver and Mike Compton on mandolin. This is a terrific combination: Lauderdale's approach to bluegrass and Hunter's vision of the unique American characters most will recall from his years spent writing with Jerry Garcia. Check out "Jack Dempsey's Crown"... a memorable barroom tale along the lines of Grateful Dead songs like "Wharf Rat".

"Don't Give a Hang" is another character song, sung from the point of view of a curmudgeon who can't even enjoy the obvious humor in his observations:

You think I'm proud
to be this way?
Oh I ain't proud
I'm just dismayed

There's not a weak spot on the album. Check out a sample with a free download of "Love's Voice" available here:


Lauderdale is one of the most unique artists working today. Check out his tour dates... On one day (June 24), he's playing a free show at the Opry Shop, appearing on the Grand Ole Opry then driving back into town on I-40 to get to the Station Inn, a bluegrass venue that's featured many, many appearances by Lauderdale and his cohorts over the years. He's a musical treasure, and this record is just further proof.