Concert Review: The Posies, with Star Anna & The Laughing Dogs and Curtains for You 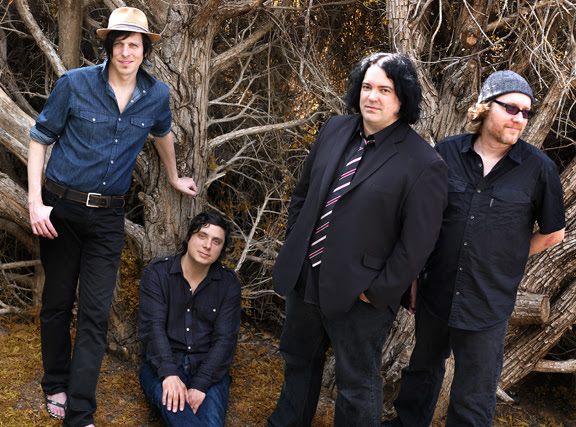 THE POSIES
The newly renovated Neptune Theatre in Seattle's University District hosted The Posies Saturday, November 19, with supporting acts Star Anna & The Laughing Dogs and Curtains for You. I'll address the headliners first. From time to time one reads of The Posies being a power pop act, or a pop act. But for me, their set was a satisfying reminder that The Posies are a rock band, albeit a rock band with very well developed pop sensibilities. The band was a four-piece, with Jon Auer and Ken Stringfellow--both excellent, and enthusiastic, guitarists--ably supported by a bass player and a drummer. And with the bass was well up in the mix, a mic inserted in the kick drum, and Jon and Ken providing a near constant electric assault, the Neptune was rocking. That isn't to say that The Posies eschewed their well-renowned vocal harmonies, or that there were not some quieter moments. But for most of the evening the harmonies rode a very robust musical wave.

I didn't try to keep track of a setlist, but I recall that we heard tracks from the newest album, Blood Candy, as well as Frosting on the Beater standards "Solar Sister" and "Flavor of the Month". Frosting on the Beater is a favorite of mine. Not only was the music first rate, but along with Teenage Fanclub's slightly older A Catholic Education and the somewhat later early albums by The Delgados, we could enjoy rock with pop vocal stylings and clever songcraft. However, the one of the true joys of The Posies is that they continue to refine and evolve, and the concert would have felt incomplete if the evening had just been a nostalgia exercise. And since the live version of a song rarely sounds the same as the studio version, I was especially happy to hear recent songs that I'd only hear on CD before the evening. Rest assured, they sounded great.

The Posies set was more than generous. I think it clocked in at 1:45, with a short break after about an hour. It is hard to pick out highlights, but I particularly enjoyed "Flavor of the Month", "Solar Sister" and "She's Coming Down Again". And it was a nice change of pace when only Ken and Jon were on stage to sing together, as it gave the harmonies a bit more space.

The Posies still put on a good rocking show, and I was amazed at how well they transition between songs and blend together with no obvious communication. You'd be well advised to consider them if they are appearing in your neighborhood.

STAR ANNA & THE LAUGHING DOGS
I reviewed this band's most recent album a few months ago, so I was interested in hearing them live. I walked away even more impressed with their live show than I was with their very good album. Star Anna's vocal delivery is a stunningly good, and the band is excellent, individually and as a unit. The band consists of a drummer, bass, keys, and lead guitar, with Star Anna playing the guitar on many tracks as well (for the record, the line-up is Star Anna, Justin Davis, Travis Yost, Keith Ash, and Ty Bailie). The sound generally is a country-noir rock sound. But it seems to me that the set rocked out more than the album, which pleased me and provided the perfect warm up for the headliners. If this band has the ambition, and necessary bit of luck, I think folks outside of the Pacific Northwest will be hearing a lot from them.

CURTAINS FOR YOU
The first band, Seattle’s Curtains for You, were completely unknown to me, and I'll have to admit that I didn't pay a lot of attention to them during their first few indie rock standards. They were energetic but I didn't feel very connected to them. However, a few songs further into the night I began to enjoy their performance. All are very good musicians: Peter Fedofsky (keys, vocals), Mike Gervais (lead guitar, vocals and some sax), Matthew Gervais (lead vocals, rhythm guitar), Dave Lawrence (drums), and Nick Holman (bass, vocals and some horn). As their set evolved, they demonstrated vocabulary of musical expression far beyond that of an indie pop band. To be fair to these guys, and since I'm based in Seattle, I'll have to give them another look.
Posted by Rocksteady74 (Scott) at 11/22/2011