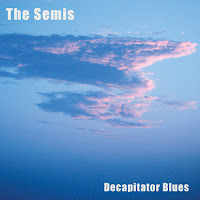 On their latest release, the Semis have thrown me a bit of a curveball. Having been introduced via the single "Popov" earlier this year, I was expecting Teenage Fanclub-style power pop to dominate Decapitator Blues. Of course, the title might have been a clue for me... but opening track, "Fun In the Sun", does carry on in a similar fashion - play it right after some classic Teenage Fanclub and tell me what you'd expect from this band. It's perfect: harmonies, jangly guitars, breakneck pace - everything a power-pop fan looks for.

And here comes the curveball: song two "Snuffed," is a really great bit of raunch reminiscent to me of the Stooges and the Stones, and that's the style that carries on pretty much throughout the balance of this record. Two songs later, "Ciggy Fun Boy" sounds for all the world like a Keith Richards vocal outtake. Here's the song "Faux Fur", with a hard, ragged guitar riff over breakneck drums and bass:

Here's a video of them performing the song "Echo" earlier this summer:

The 6:10 "Echo" is pretty psychedelic and kind of British Invasion-sounding, and is followed by a 2:17 sludge guitar workout called "Echo Part II" which is a little more psychedelic, and "Screwtop Wine" with some growling guitars, staccato drums and slurry vocals, before closing on a short but very effective guitar solo. The closing track, "The Ballad of Andy Howard", finishes with some even crazier guitar playing which echoes out on a delicate pedal steel outro. All in all, these guys cover a lot of rock and roll turf and while I know this isn't easy to do, they make it all sound very natural. Great guitar riffs are all over the place.

The band consists of Billy Summer, Matt Simmons, Kyle Lovell and Jay Schultz, and they seem to be fairly well-known in the Tampa area... I'm of the opinion that more folks should know about these guys. I don't know if any of you are familiar with a band from Athens, Georgia (sadly, defunct for several years now) called the Glands, but the Semis really remind me of them and that is a compliment of the highest order. Check them out on Reverb Nation. I think this is a terrific record.

This is good stuff.

They have been kickin major ass here for years! Wish more peeps outside St.Pete and Tampa would get'em a taste cause it's long overdue.

This band is fantastic. thanks for the introduction. I hope they don't get famous so I can keep them to myself.