Blue Sky Archives are an unsigned Glasgow band that plays a melodic strain of post rock. The groups consists of Gavin MacDonald, Lauren Mayberry, Paul Mark McGrath, Matt Phelan, and Ross Rankin. We have their most recent EP and an older EP below for your enjoyment. 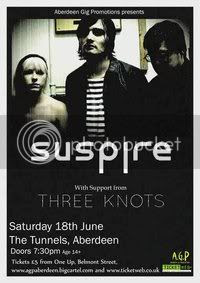 "Salvation Sister/Set in Stone" was released in May 2011.

Glasgow's The Twisted Melons boast a big sound, with the riffs you'd expect to find in an arena. But the the three Johnson brothers (Mark, Paul and Stephen) also are good songwriters and musicians, and are thoughtfully different enough to put their own stamp on the process. The latter point is underscored by their new single, "Language is God":

We've featured Cancel the Astronauts before, but I'm posting this little teaser video to let everyone know what indie pop goodies they can expect from the lads when their album is released later this year.