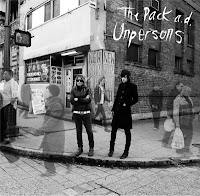 The Pack a.d. is a rock/blues/punk duo (sound familiar? Well, it gets a little moreso) from Vancouver: Becky Black (guitar/vocasls) and Maya Miller (drums). They produce a strong, strong sound and have three albums out, including 2010's we kill computers. Now they're about to release Unpersons, a disc they've recorded with Detroit mastermind Jim Diamond (yes, that Jim Diamond: he puts his pants on one leg at a time, but when his pants are on, he makes DIRTBOMBS, WHITE STRIPES and OTHER great records). You can make the obvious comparisons, White Stripes being maybe the most obvious, and those comparisons will serve you well if they lead you to give this thing a listen.

Here's the Soundcloud page where you can listen to and download "Sirens", the first song. It's a great little piece of noisy drumming, distorted guitars and melodious vocals:

For a band with just two people, there's a decent variety in tempos, guitar sounds and even vocals - some of it with a real snarl - with the common denominator being that it's all rocking. Where "Sirens" has a real nice vocal and garage-rock base, song four, "8" is pure punk... with a tribal drumbeat, snarled vocals and a shouted call-and-response on the chorus. Then a little further along, "Positronic" gets kind of psychedelic.

Here's a recent live video which shows you that, yes, it's two humans making all that rock:

And here's a video from a previous album, notable for being hilarious and rocking:

They're embarking on a tour soon, and the album is due for release September 13.