Howling Bells: "Into the Sky" from forthcoming album The Loudest Engine 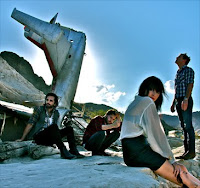 First I've heard of this band... and I'm happy to share it on here. The Australian-formed, London-based four piece comprising singer/ guitarist Juanita Stein and her brother Joel (lead guitarist), drummer Glenn Moule, and bassist Brendan Picchio, travelled to Las Vegas to record this record, which will be released on Cooking Vinyl on September 12.

Here is the first song off their forthcoming album The Loudest Engine, "Into the Sky". I like the sound, strong vocals and psychedelic guitars:

A little more to listen to at their website, looks like you can stream some more songs on there but I can't embed them here... it all sounds pretty good: