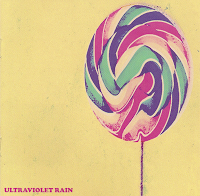 The Big Sweet is a power-pop quartet from Cleveland, Ohio who bring to my mind an imagined collaboration of XTC with Lloyd Cole and the Commotions, with more than trace elements of Big Star... what I'm trying to say is that these guys have a way with a hook, a backbeat and a guitar line and really can put it all together. The music is catchy, and very well-crafted.

The band consists of Sam Regas (Vocals, Guitar), Brad Berbari (Guitar, Keyboards), Matt McDonald (Bass), and Drew Watson (Drums, Percussion, Effects), and this is their second record. From the opening of "Laces" with its ultra-jangly guitars and infectious backbeat, the pop/rock ambitions of The Big Sweet are on full display, and the promise is kept on song after song.

"In And Out of Style" is a power-pop ballad with lots of tempo changes and jangle, "Softened Gold" is fairly similar, but shorter, then "N-C" stretches out with some guitar solos... all of it with some terrific vocals reminiscent, to me, of Lloyd Cole and Alex Chilton. The centerpiece, the 7:01 "Wet On Canvas", is full of synths, layered vocals and all kinds of guitars, and it swirls and swirls...

Listening to Ultraviolet Rain with no knowledge of the band's background, I'd expect this is the work of a group of power-pop veterans who had been gigging in other bands for years, collecting their own songs and finally taking the big step of booking a studio and a producer and laying it all down. And I'd be wrong. These are kids who went from borrowing their parents' R.E.M., GbV, Mats and Big Star records to covering that stuff, to recording and coming out with this very accomplished record before they're old enough to vote. Highly recommended for folks who dig power pop.

You can check out the music and stream a few tracks at their MySpace and Facebook sites: