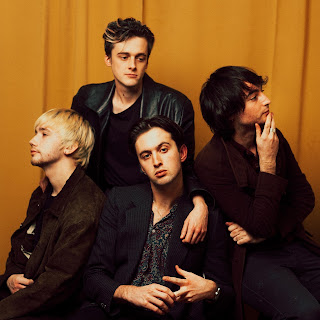 If a band describes their new song as "a deranged attempt at seduction which draws on 70s 'Top of the Pops', glam rock and memories of misguided adolescence", we are all ears. And that is without considering our significant other's suggestions that it could be a chapter in our biography. After listening to Bandicoot's "Fuzzy", we'd have to say that the band nailed both the song and the description -- our pride precludes a response to spousal derision of our persons. But back to "Fuzzy", this song chugs, slashes and swings in all the right places. It is the final song we will listen to tonight, and the first song we will listen to in the morning. Probably the second and third we will listen to in the morning as well.

"Fuzzy" will be out as a digital single on April 9 via Libertino Records. Bandicoot is a four-piece from Swansea, Wales, home of the Swansea Swans Football Club (where a friend of mine played this winter until he was injured).