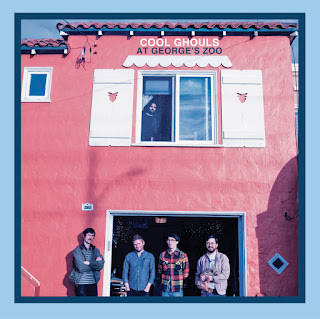 Long time favorites of this blog, San Francisco's Cool Ghouls have rightfully been known as an ace garage and psychedelic pop band. However, the truth is that they have always been much more. From their lyricism to their sense of humor to the sweet harmonies supplied by multiple vocalists, the Cool Ghouls are a top shelf musical entertainment package. And just in case anyone in the indie music world needs more evidence, their new album At George's Zoo is the band's Swiss Army Knife album. Yes, there is garage rock and psychedelic pop. Yes, there are harmonies. But there also are horns and arrangements that could put them on a late '60s - early '70s soul stage. There are strings to embellish baroque pop songs, and folky songs to slow the pace and change the vibe.

But the story here isn't the scope of the music, it is about the consummate skill in execution and conviction in the performance. At George's Zoo isn't a band playing at being a surf pop band, a folk band, a psychedelic band, a garage band, it is a band that really is all of those. That breadth is rare, and should be treasured. The members of Cool Ghouls may be at the stage of life where it isn't possible to play numerous shows or tour, but we certainly hope they can find time to continue to make albums like this. And it certainly is one of our top albums of this young year.

Cool Ghouls are Pat McDonald, Ryan Wong, Pat Thomas, and Alex Fleshman. At George's Zoo will be out March 12 via Empty Cellar (US) and Melodic Records (UK).