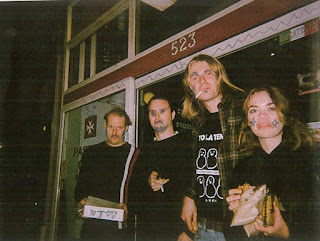 One of our highlights this week was the release of "Don't Understand the Shorthand", the second single taken from the upcoming album by Marrickville, Australia's Mope City. The band is centered around Matthew Neville & Amaya Lang, who are joined for this record by Shaun Donovan (drums) and Nick Johnson (bass). We would characterize the band's music as a downer indie pop with flashes of distortion. There are similarities to Galaxie 500 and Low, but Mope City's songs are distinctively theirs and we find them quite addictive.

The album is titled Within The Walls, and will be out April 30 via Tenth Court.