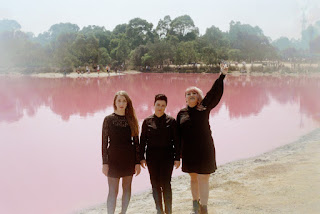 A couple of days ago we featured two terrific songs by Melbourne outfit Double Vanity. However, it appears that one of us pressed the wrong button a day later and wiped out the post. We don't like doing work over, but the musicians don't deserve to have their feature suffer such a short shelf life. And to be honest, these songs are so good that they deserve a second post anyway.

Double Vanity are Zec Zechner, Sarah Blaby and Amy Chapman. They also use a Rhythm Ace Drum machine that probably is not cut in on royalties, merch sales, or ticket sales. Their music is released via Psychic Hysteria. The band plans an album for later this year.