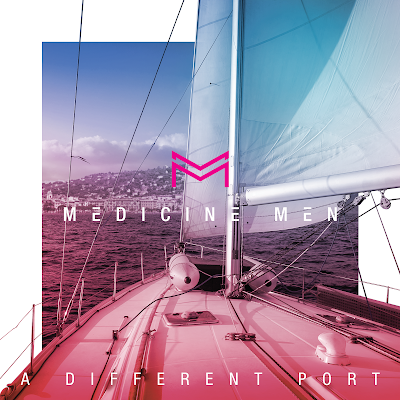 Medicine Men have a knack for catchy, often anthemic, guitar pop with electronic elements expanding the sound. A Different Port, the Scottish band's second album, contains ten songs that display their ability to create music that seem instantly familiar and relatable. The tones are warm, the melodies pleasant and the tempo is upbeat. There isn't a weak track on the album, but several push their way forward as special musical moments, including "Back On Board" and "Getaway Driver" (both of which are superb tunes to accompany a drive to the beach or the mountains).

Several years have elapsed since Medicine Men's well-received debut. It is clear to us that they have used the time well, as this album is unusually substantial and consistent for a sophomore effort.  Sitting on the patio in the morning sunlight with a mug of coffee and A Different Port playing, this day seems full of promise.

The album is out now in digital, vinyl and CD formats via Last Night From Glasgow.