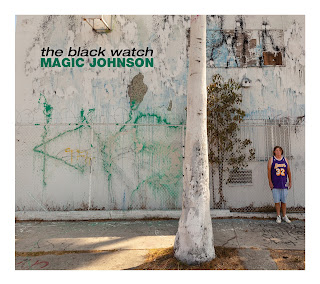 The Black Watch is the long-running musical project of California English professor, painter, and author John Andrew Fredrick. This past June Fredrick released both a career retrospective and a new set of songs titled Magic Johnson. Consisting of a generous 16 songs reflecting Fredrick's appreciation for British psychedelic rock and Flying Nun guitar pop of from the '80s, and his love of guitars, Magic Johnson continues the band's run of engaging and satisfying albums.  In style, the album seems both nostalgic and fresh -- the latter quality perhaps attributable to the enthusiasm of Fredrick and his mates as well as their restraint in weaving elements from their influences. You really owe it to your ears to check out this album at the Bandcamp link below.

In addition to Fredrick, the players on Magic Johnson are Chris Rackard (bass), Andy Creighton (guitar), and Rick Woodard (drums). The album is out now via ATOM Records.