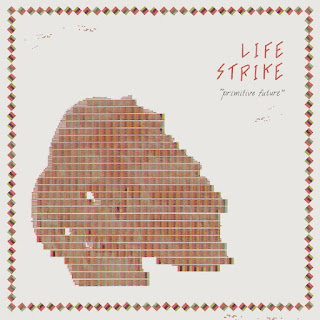 A couple weeks ago, we had never heard of Life Strike, but now their debut album Primitive Future is a staple of our daily listening.  Frankly, it is things like that that keep us going at WYMA.  Formed by Nick Pratt, ex-Deaf Wish bassist and songwriter, and Guitarist Patrick McCabe of Brisbane's Dollar Bar, Life Strike launches from the rich guitar pop history of Nick's native New Zealand with songs that variously bring to mind The Verlaines, The Bats, and The Clean, among others.  The songs reflect a knack for melody and simple but effective song structures, but manage to convey a sharp, dark edge as well.  Of the more pop oriented songs, "Pages" is a standout, but "Econo" and "Megabytes Are Dying" are strong contenders.  In the garage rock vein, the three opening tracks are excellent, with "Black Curtain" drawing favorable comparisons to The Black Lips.  "Contact, No Contact" reminds us of post-Genesis Peter Gabriel and The Jean-Paul Sartre Experience.  But there really isn't a weak song in the set.  Primitive Future is another triumph in the seemingly inexhaustible river of good music coming out of Melbourne

The band has been through several drummers.  Ollie Mackay served for the recording of Primitive Future, but the role now filled by Scotty Birque.  We don't want to start unfounded rumors, but when we read that Nick and Patrick both have suffered serious accidents requiring insertion of titanium in their bodies, and that the band is on their third drummer, one wonders if drummer auditions inadvisably involved trial by combat.

Primitive Future is out now in vinyl and digital formats.  See the Bandcamp link below.