"Mystery Man" by The Echo Session 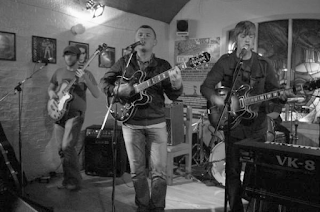 Tam Maher (vocals/guitar), Alistair Morrow (guitar/vocals) Stuart Morran (bass/vocals, and Ryan Rimkus (drums/vocals) are The Echo Session.  In the mid-'00s the Glasgow band recorded a number of songs that, save a few, were never released.  Their fans have been hoping for almost 15 years that this omission would be rectified.  Some of us joined in the hope in 2016 when the Flowers In The Dustbin label ("FITD") released a couple of the songs.  We are happy to report that the album, titled Wait And See (the "wait" in the title might seem ironic, but the album is named after the closing track), will be released October 25 in digital and CD formats.  The full release will be preceded by a single release of "Mystery Man", the album's second track.  A note-perfect '60s/British Invasion-style tune, the single draws you into the world of The Echo Session.  Garage pop, '80s British guitar pop and British Invasion are on offer, fresh, genuine and blessedly uncomplicated.  We will have more to say about the entire album closer to October, but for your Tuesday treat, here is "Mystery Man".

Wait And See will be released via FITD, which in our view is a superb label.  An indication of their quality is demonstrated by their 10-year retrospective, Under the Paving Stones (our feature here).