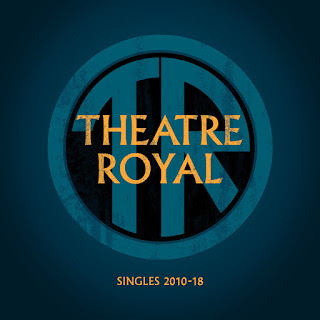 We like being hip and knowing a lot about the world of indie rock. We even like pretending that we are hip and know a lot about the world of indie rock, even when our knowledge lags behind our ambition.  But we aren't going to pretend here -- until a couple of days ago we were unfamiliar with Theatre Royal.  However, a chance viewing of some commentary on our Twitter feed (including a recommendation by Wally of The Beautiful Music label link), let us to one of our more delightful discoveries lately.  So we would like to share with you the most excellent Singles 2010-18, a collection of 22 songs released by the band between ... well, you just read the title, so you know.

Wielding two guitars and boasting an aggressive rhythm section, this four-piece dishes out classic up-tempo west coast rock adorned with sweet harmonies.  We have been playing it repeatedly since we found the Bandcamp link, and we highly recommend that you do the same. The only aspect of this record that makes us sad is that we have gone almost an entire decade no listening to a band that would have been one of our favorites had we known.  We will make amends.

The good lads of Theatre Royal are Oliver, Robert, Jon, and Bendan.  Singles 2010-18 is out now in digital and CD formats.