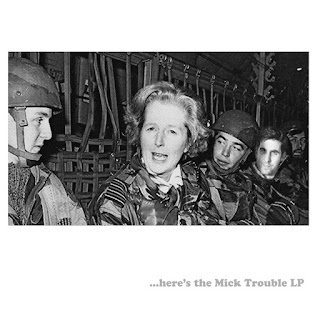 It's The Mick Trouble LP is an album that likely will put a smile on the face of guitar pop fans, especially the fans of '80s British guitar pop and some '60s British Invasion bands.  There is a back story about Mick Trouble being a UK musician from several decades ago whose recordings are finally getting the release they deserve.  It is a cute enough story, but we won't spend any more time with it because it isn't true (although we did fall for it hook, line and sinker when the EP was released last year).  In fact, Mick Trouble is Jed Smith of My Teenage Stride and Jeanines.  The important fact is that Jed has crafted a set of songs that could well have been written and performed by a decades-ago talent who was influenced by Nick Lowe, Television Personalities, The Jazz Butcher and Wreckless Eric. And that is more than enough for us.  Expect jangle, rubbery bass, pop hooks, a punk-influenced performance style and some tongue in cheek humor aimed at British culture.

Jed did all the work himself -- you should reward him.