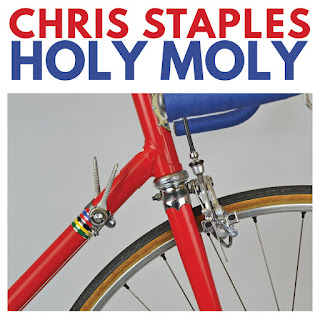 Chris Staples' career spans groups and solo work in indie rock, pop, and folky singer songwriter ventures.  He began in Florida, but now resides in Seattle.  As a solo artist, Chris' songwriting is introspective.  However, the execution -- even with gentle, slow tempo tunes -- displays a knack for melody and pop expression.  His talents are well displayed on Holy Moly, which was released via Barsuk Records last week.  The album begins with the comfortable pop of "World On Fire", and then invites everyone to wiggle their hips with title tune "Holy Moly".  The following tracks find the album settling into a soft, summery folk-pop.  If one had heard "Holy Moly" first, one might initially be disappointed that the other songs are not similarly constructed.  But we suggest giving the entire album a chance.  In fact, it may well compete to be your music of choice for time in the afternoon breeze with a favorite beverage.