Wrest - Coward Of Us All 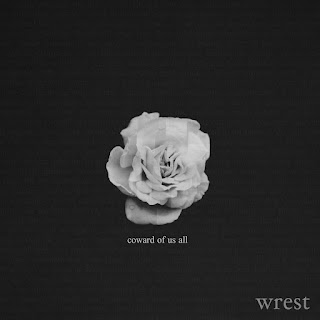 Coward Of Us All is the debut album by Edinburgh's Wrest.  Featuring widescreen, atmospheric arrangements, soaring guitars and raw, incisive, and emotion-packed lyrics, it is a fine addition to the sort of melodic alternative rock that the Scots have done so well this century.  Our first exposure to the band was via album single "Human", the excellence of which prompted us to seek out further singles "Adventurers" and "Hope Springs".  By that point, we counted ourselves as fans and dove more deeply into the entire album.  We are happy to report that the rewards for the listener are rich and plentiful.  The sound is full, and the rhythm section robust.  The songs are well-crafted and thoughtfully performed.  This is a rock album with plenty of warmth, heart and charm, and it makes our day better every time we play it.

Wrest are Stewart Douglas (lead vocals/guitar), Stephen Whipp (vocals/guitar), Craig Robertson (bass) and, now, Jonny Tait (drums), although for the recording session John Alexander provided the drumming. Coward Of Us All is out now in digital and CD formats.