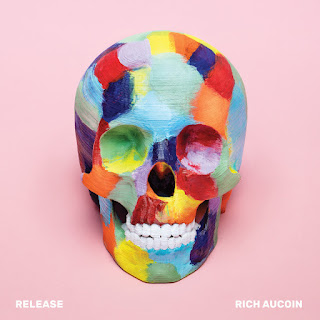 As running and cycling enthusiasts, we are inclined to respect Rich Aucoin without regard to his music.  He has toured across North America by bicycle twice for charity, scheduling his shows to accommodate his mode of travel, and has participated in half marathon charity runs as well.  However, our focus here is music, and Aucoin's most recent musical effort has captured our attention.  The 11-track Release is a pop album of impressive breadth, with propulsive rhythms tugging at your dance impulses and pop hooks stimulating your brain.  And it is realized in vivid colors and sparkling details.  The arrangements are spacious and dynamic, embracing changes in tempo and volume, and allowing pauses to embellish the hooks.  The compositions are thoughtful and fully formed, but there is nothing precious or fragile in Release.  This is an album bursting with energy and purpose.  Cue it up, expect to be entertained.  You won't be disappointed.

Release is out now via Dine Alone Records.