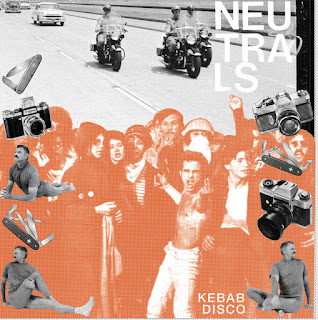 Not many bands from California's San Francisco Bay Area sound like a punk/post punk band from Glasgow.  But most bands are not fronted by Allan McNaughton.  Allan was raised in Western Scotland and  played in Glasgow post-punk band Glue (we believe the time frame was late '80s-early '90s).  He has since relocated to California, where his musical talents were applied to Giant Haystack and, now, Neutrals.  With Neutrals, Allan and his bandmates embrace Allan's Scottish background and California present in a connected and not quite autobiographical series of vignettes.  Presented in  both vintage punk and Glasgow indie rock styles (with a touch of California), and voiced with Allan's still thick Scottish accent, the songs depict snapshots of life in Glasgow on the A-side and California on the B-side.  You will hear of art school, technical school, professional jealousy, drugs, romance, and late night kebabs, all before crossing the Atlantic for food courts, hating on the summer of love and a song about the iconic motorcycle cop.  The music is excellent, the spirit is strong, and this album is one of the fun listens of this year.

Neutrals are Allan and two Phils.  Kebab Disco is out now in digital format (vinyl is sold out) via Emotional Response Records.